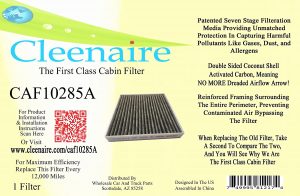 Almost everyone knows to change their oil filter regularly to keep the engine healthy, however, very few people are aware that there is an even more important filter inside their vehicle that should be changed. It is the cabin filter that protects YOUR health. So congratulations on being one of the lucky few to take action.It is a known fact that breathing dirty air is unhealthy and causes many illness. And yet, millions of people get into their car, truck, or SUV every day and breathe air that is SIX times more toxic than even the air outside. They have no protection from the exhaust fumes coming in from the cars ahead, or the road dust, bacteria, and allergens that are coming out of the vents and ending up in their lungs. This is because most OEM filters that come from the manufacture are a single stage paper media that do little more than keep the bugs and leaves out of the HVAC system. The good news is that they recommend replacing your cabin filter every 12,000 to 15,000 miles. It is usually a very simple task that can be completed in minutes. By using Cleenaire for your next change, you will finally breathe clean air!

Cleenaire: An American-Owned Company.
Products Designed In The USA.